The F. R. Feaver Memorial Trophy was first introduced in 1972 and is awarded annually in memory of Frank Feaver who was the OASA Secretary from 1943 to 1956. Frank’s dedication, service and devotion played a major role in the expansion and development of the game of softball. The award is presented to a player, official or officer of any league or association who, in the opinion of the Feaver Awards Committee, has made an outstanding contribution to the game of softball.

The 2021 winner is George Ryder of Port Dover. George has over 25 year of coaching experience, including Team Ontario coach in 2013 and 2017 where he led the team to gold. He was a Junior Men’s National Team pitching coaching 2012 and 2014, and a member of the OASA elected executive from 2007 to 2014, including two years as President. George was the winner of the President’s Merit Award in 2010, the Gil Read Coaches Honour Roll in 2019 and a winner as a player and coach of multiple OASA and Canadian Championships. George continues to give back to local minor ball players through pitching instruction. 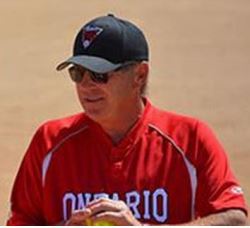